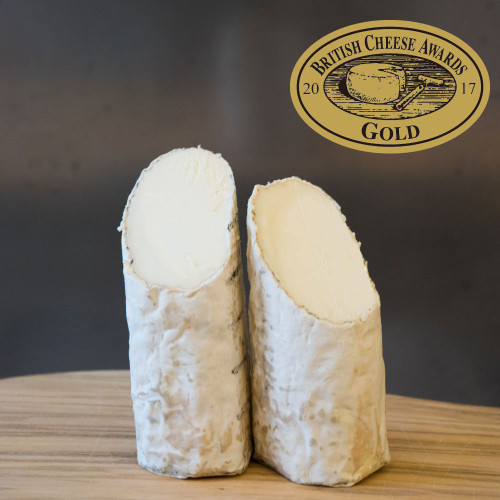 This ripened goats' milk cheese is first rolled in ash, then matured to develop a complex, yet subtle flavour. The texture is like ice-cream. Luxurious grilled.

Golden Cross cheese is sweet, soft and delicately ‘goaty’ and grassy, with an ice-cream like texture.

Kevin and Alison Blunt make Golden Cross from the milk of their own goats, which are fed only on pasture or hay (no silage for them!).  The recipe is loosely based on the famous Sainte Maure goats’ milk log from France, but with a bloomy penicillium candidum coat and slightly firmer paste.

The young cheese is rolled in ash, and then matured for a couple of weeks to allow the growth of a natural rind and the development of a more complex flavour.

In 1989, Kevin and Alison saw the light, gave up their Biochemistry and Human Biology backgrounds, and began their search for the 'good life'.  Their small start only afforded a few goats and barns, requiring them to live in a caravan.

Originally they supplied  their goats’ milk to a local cheese-maker, but, when he retired, they took up the responsibility and became the cheese-makers themselves.

Going from strength to strength, the Blunts have become two of Britain’s more renowned cheese-makers, and now have 300 goats (and a house!).

Lime and Chilli fruits for cheese