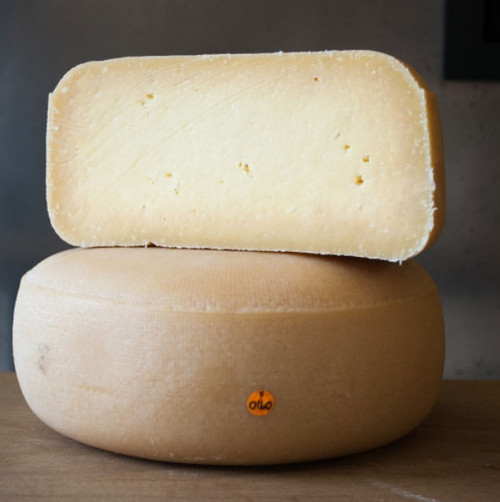 A powerful, fruity cheese, with a full sweet flavour. Matured for at least 16 months to develop its fabulous crystalline texture.

Old Winchester is based on a Gouda recipe. Gouda recipes call for the cut curds to be washed after draining. This removes lactic acid from the curd, making Gouda characteristically sweeter and also prolonging its life. Various tweaks to the original recipe has led to a Gouda/Parmesan/Cheddar cross, and a cheese that is unique to the Smales family.

On their farm in the New Forest, Mike and Judy Smales make this modern British classic.  In 2000, 30 years after they first started farming, the decline in milk prices led them to find an alternative outlet for their milk.

So, with the milk of a herd of 180 cows and a basic Gouda recipe they began. Lyburn Gold was their first creation: a young semi-hard Gouda, with a meadowy, buttercup taste. After the first year, Mike and Judy nervously entered the British Cheese Awards, and medals followed.

Since then, the Smales’s cheeses have gone from strength to strength. The further maturing of  Lyburn Gold has given birth to Old Winchester (or Old Smales), with the extra maturing adding further depth of flavour and  Parmesan- like characteristics.

The cheese has a full flavour, an underlying sweetness, and a wonderful crystalline finish that crunches on the tongue.

Try Old Winchester with quince membrillo for a real treat.

Old Winchester was Gold winner at the 2017 Artisan Cheese Awards.

Allergen Advice
This cheese contains an enzyme called Lysozyme, which helps stabilise the active starter cultures and which derives from egg white.

Wold Top Against the Grain