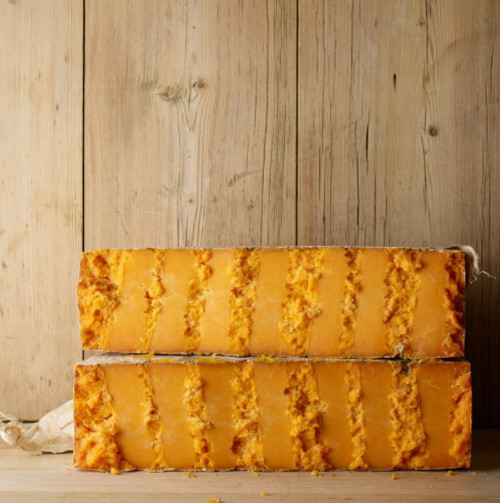 Englands' only unpasteurised Red Leicester cheese, with a creamy and mellow flavour.

Sparkenhoe, made by David and Jo Clarke, is England's only unpasteurised Red Leicester cheese. It's the first to be produced on Sparkenhoe Farm since 1875. The cheese is creamy and mellow, with a slightly flakey texture. The addition of natural annatto gives the cheese its deep orange-red colour.

David and Jo Clarke are dairy farmers who run one of the country’s top herds of pedigree Holstein-Friesian cattle. When they decided to revive the tradition of cheese-making on the farm, they discovered that Red Leicester had been made there from1745 until1875. David was initially wary of making the cheese, as Red Leicester cheese had a poor reputation – all that remained at the time was factory-made cheeses that bore little resemblance to the great farmhouse cheeses of the past. In fact, traditional Red Leicester cheese had died out in England in the early 1950s.

In the end, it was David and Jo’s desire to re-create the original great Red Leicester cheese that overcame their initial worry. So, in 2005, armed with an old recipe and having completed a cheese-making course, the Clarkes set about reviving Red Leicester, using traditional methods and raw milk from their own herd.

The name Sparkenhoe has historical significance, in that it is an old Leicestershire term meaning ‘gorsey nob’. It is also the name for the ‘hundred area’ in which the farm is situated.

* This is a hand-made, artisan cheese, which may contain naturally occurring blue veins. These are normal and intrinsic to the nature of this type of cheese and add to its character. We think they taste good too!