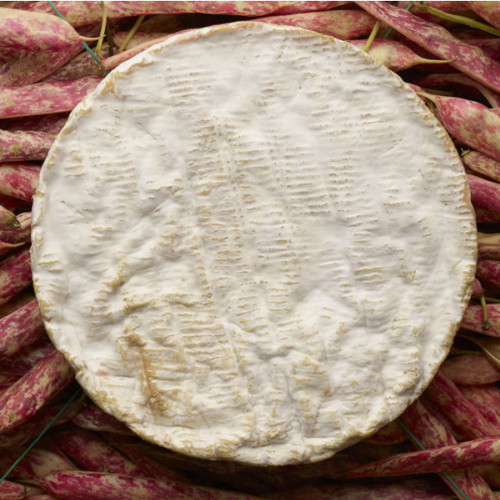 A fabulously full-flavoured Brie-style cheese, hand-made in Suffolk by Jonny Crickmore from the milk of his own herd of Montbeliarde cows.

Baron Bigod is a stunning brie-style cheese, with a rich, full, earthy flavour and a lingering finish. It's made by Jonny Crickmore from the milk of his own herd of Montbeliarde cows in Suffolk. Jonny likes the cheese best when its wrinkly coat has broken down the golden, buttery paste under the rind, while a thin line of lactic curd at the centre remains.

Jonny’s family has been farming the land here for three generations, but it was only recently that Jonny decided it was time to make some radical changes.He wanted to start selling raw milk, and to move into making the best raw milk cheese that he could. But raw milk and fine cheese need the best raw ingredients, and the family’s herd of Friesians weren’t really the best place to start.

So Jonny set off to France in search of cows that could produce the highest quality milk available. He chose Montbeliarde, the cows whose high protein milk is used for some of the famous French cheeses such as Comté and Vacherin Mont d’Or. He brought his ladies back to Suffolk, and set about building up his herd by cross-breeding Friesians with Montbeliardes to gradually add the great benefits this breed brings to the family’s own herd.

Great milk deserves the utmost respect, and Jonny’s perfectionism in choosing his herd is matched by his approach to cheese-making. The warm milk straight from the milking parlour is handled as carefully as possible to preserve its delicate cell structure. The milk is gravity-fed to the dairy, where it is gently poured into the cheese vat.Each stage of the process is done by hand, from cutting the curds with long knives to carefully transferring the fragile curds into the moulds by using the traditional pelle-a-brie ladles.