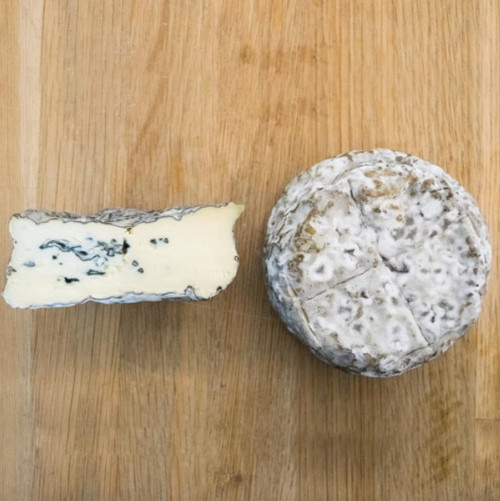 Made by Claire Burt in Cheshire from local milk, this little blue cheese is creamy in texture, with a sweet tang from the blue veins. The paste softens as it matures, but the flavour remains mellow and rich.

Burt’s Blue is a delicious, little blue cheese from Cheshire.

Claire Burt set up Burt’s Cheese in 2009, with the ambition of making excellent quality cheese with local, Cheshire milk. Claire originally studied food and nutrition, and went on to work in the food trade for several years in product development, before deciding the time had come to do something for herself.

Having no family farm to draw upon, Claire set about buying local milk, and made her first cheeses on her kitchen table. She soon moved on to creating a cheese-making room in her cellar, and, when the business really took off, moved into a room at the Cheshire Cookery School. With the cheese-making room sorted, Claire was able to concentrate on her cheese, and medals soon followed.

Claire originally created Burt’s Blue simply because she liked eating soft, creamy blue cheeses. While there was no master plan, she happens to have created something really quite special. Most blue cheeses are made in a fairly large mould. A traditional Stilton weighs in at around 8kg, and even smaller blue cheeses are rarely less than 1kg. Claire’s skill in creating a tiny blue cheese is not easily matched.

Penicillin Roqueforti is added to the milk, and it is this greenish grey mould that grows on the surface of the cheese to create its attractive, bloomy coat. The magic occurs when the cheeses are hand-pierced to allow oxygen to reach the interior. Small pockets of blue form in the creamy paste, and tiny blue veins can appear through the spaces between the curds. In such a small cheese, the distribution of blue can be hard to control, and so the blueing can be a little sporadic, but the flavour that it brings permeates the whole cheese. As the cheese matures, the paste begins to break down, bringing a delicately creamy richness that balances perfectly with the mineral tones of the blue.